This article was published in the Medford Mail Tribune. 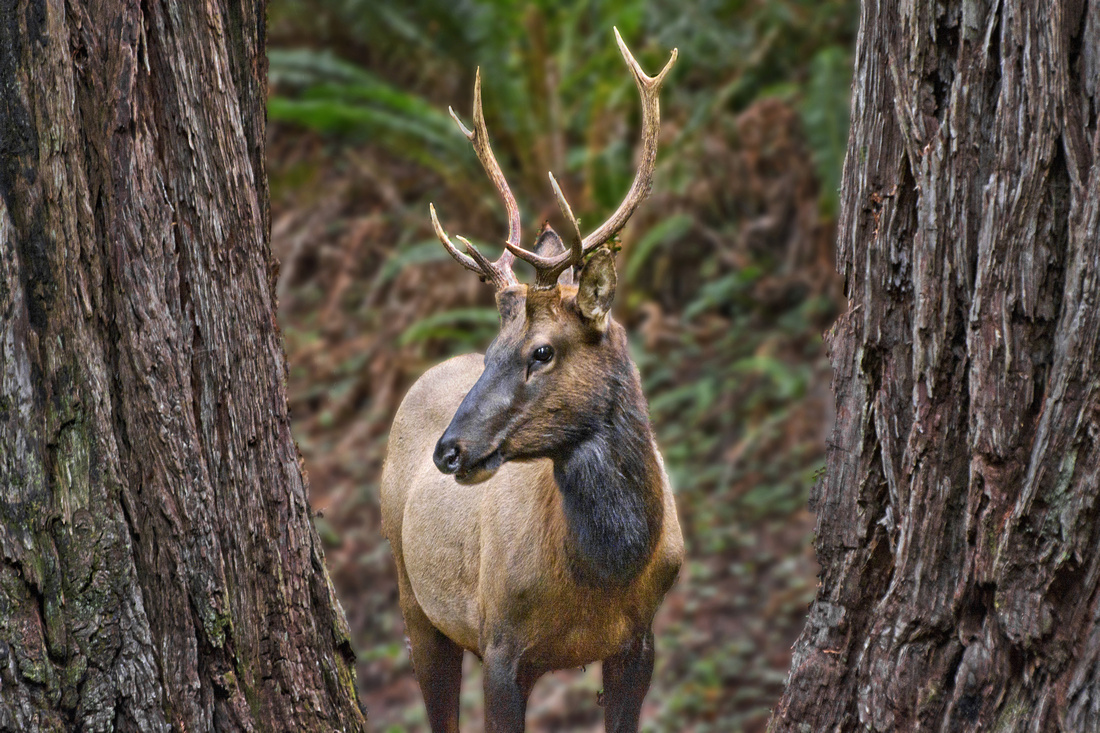 Face to Face with a Bull Elk in the Redwoods

There I was, with no sign of an impending encounter with a bull elk, as I hiked the remote and deserted Friendship Ridge Trail in Prairie Creek Redwoods State Park south of Crescent City before Labor Day.

As I walked through the giant trees, I was thinking about the fact that while redwoods can be more than 300 feet tall, they have very shallow root systems. The reason they can withstand strong winds or floods is that the roots of many trees in a grove are intertwined.  They are like many communities in nature, I thought – they are stronger together.

My thoughts were interrupted, though, by seeing fresh elk scat along the trail. This put me on alert because it was rutting season, when Roosevelt bull elk can be particularly aggressive.

I came around a corner, and there stood a young bull elk, twice the size of local deer, its impressive antlers towering above me, eating foliage from the side of the trail.

He looked at me with interest, but when I stopped, he went back to grazing, showing neither aggression nor fear.

The slope the trail cut through was too steep and dense for me to be able to go around, so I decided to wait, and to take photographs in the meantime. Surely, he would leave the trail to go up or down the slope, opening the way for me to pass.

Growing impatient, I decided to see what would happen if I cautiously took some steps toward him, but anytime I did, he turned his 850-pound body to face me. Not wanting to be one of those fools you see in the news who provoked a wild animal by encroaching on its space, I backed up again.

Soon after, he decided to stop eating and chew his cud – to regurgitate some of what he had eaten back into his mouth for a second chew.

By now, an hour had passed. I had planned to complete a 7.5-mile loop through the redwoods to the coast and past several big waterfalls. I had no intention of going back and no way to go forward.

Just then, two people appeared.  We eventually discovered that if the three of us stood side by side and walked slowly toward the elk, he would turn away and slowly walk along the trail in the direction we were trying to go. For the next mile and a half, the three of us walked together, with the elk leading the way.  The three of us, apparently, were a little like the redwoods – we were stronger and stood taller as a group than as one alone.

Once the elk finally left us and the two other hikers went on their way, I went back to marveling at this species of tree that has been on earth for at least 240 million years. Ninety-six percent of the original old growth has been logged, and climate change now threatens what’s left. I could only hope that the cathedral-like feeling I was experiencing – and perhaps quirky encounters with Roosevelt elk – will be there for future generations.