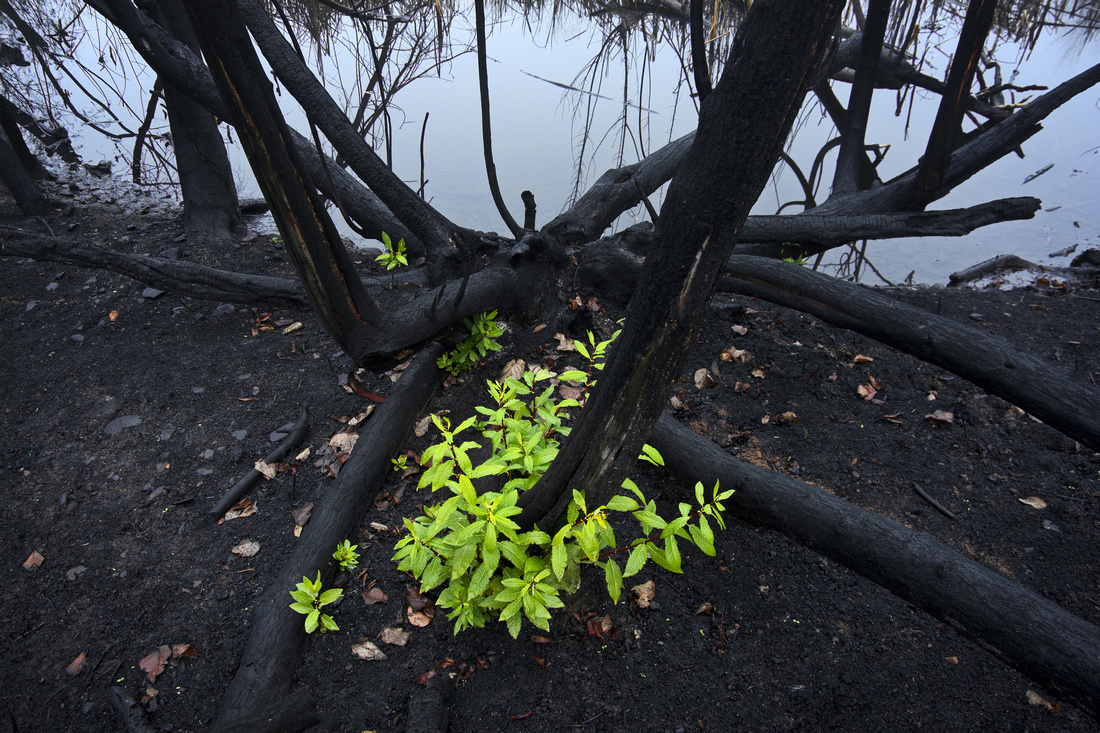 It used to be

that if you walked along Bear Creek

that runs next to town

you could see the stream

only in a few moments

because the view was blocked

by brambles of highly flammable blackberries

and tangles of branches.

Then this summer’s inferno

burned everything to ash,

clearing out the old understory

and leaving only a sprinkling of

Now you can walk freely

and see how the stream community works,

the side creeks feeding it,

the ducks and coots and geese

It used to be

that if you walked through town

you could see the money stream

only in a few moments

because the view was blocked

by fairy tales about

the generosity of the rich

who all that wealth was

Then the fire burned everything to ash,

leaving those who could least afford it

to scramble for survival

while developers and bankers met

by grabbing up the close-in valuable land

and moving “their” workers,

many with brown skin,

to the valley’s outskirts,

all in the name of charity.

Now you can see

how money and power flow

from bottom to top

filling giant pools for a few

with not much left to trickle down.

just weeks after the fire,

bring the possibility of

better than the old

with each plant and bird and animal

are taking root too

as people work together

to make sure everyone has

food and shelter and hope

and to ask what we can do

so what grows back

will be better for all of us,

now that we can see. 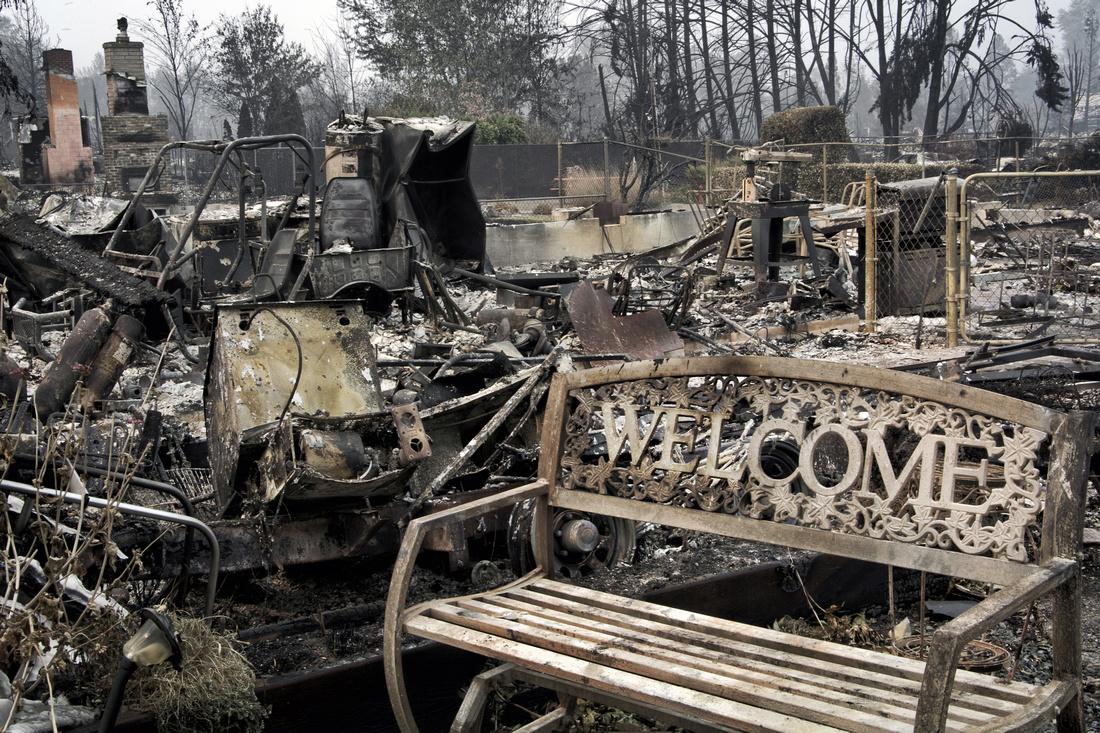 two sets of clothes and

a lifetime of memories --

as skyscraper flames are destroying

hundreds of homes of

Did they get out in time?

We hit the back roads,

"The soles of my feet,

I swear they're burning."

We can already picture

the photos the media will feed us

of some scraggly guy with stringy hair

who may have dropped a match --

with headlines: “What caused the fire?”

There will be no photos of

whose puppets for years said

let's double down on what got us here

or who gave us half measures

and asked for applause.

We drive through the smoke,

"The executioner's face,” he wails, 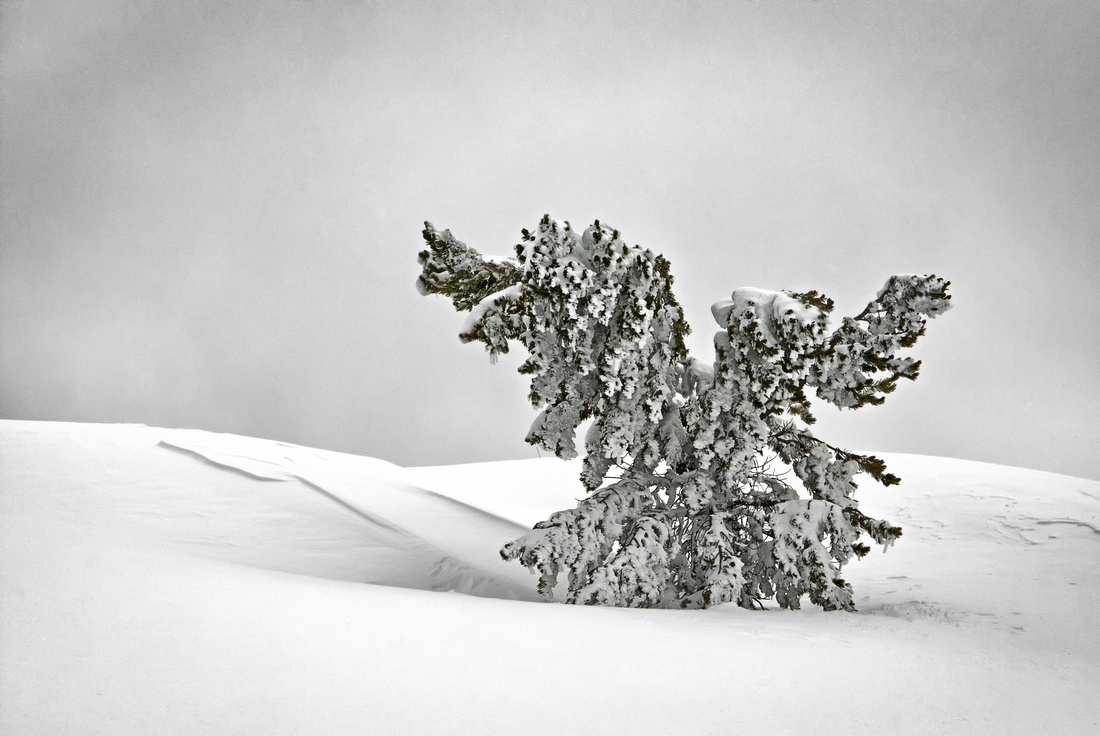 This poem and photo appeared in the third edition of Trouble magazine:

trying to find my way up

Through woods of firs and hemlocks

that would be meadows in summer

but now are huge white expanses

too cold to melt

sticking out of the snow

formed by a volcano

thousands of years ago

for a president’s son

named for a federal agent

Peaks named as if this place

and will be here

I am standing on

what it is now

and the lake and air

were many degrees cooler

and that’s just the beginning

what to name it?

This green-tailed towhee
that weighs about an ounce
migrated more than 1,000 miles
from its wintering home in Mexico
to its annual nesting ground
in the Cascade-Siskiyou National Monument,
where I watched it taking a bath at a tiny spring.
It migrates every year,
eluding hawks and falcons,
braving snowstorms and lightning,
never losing its way.
This bird is a lot stronger
than I’ll ever be.

The following article appeared in the Billings (MT) Gazette on Sept. 28, 2019. 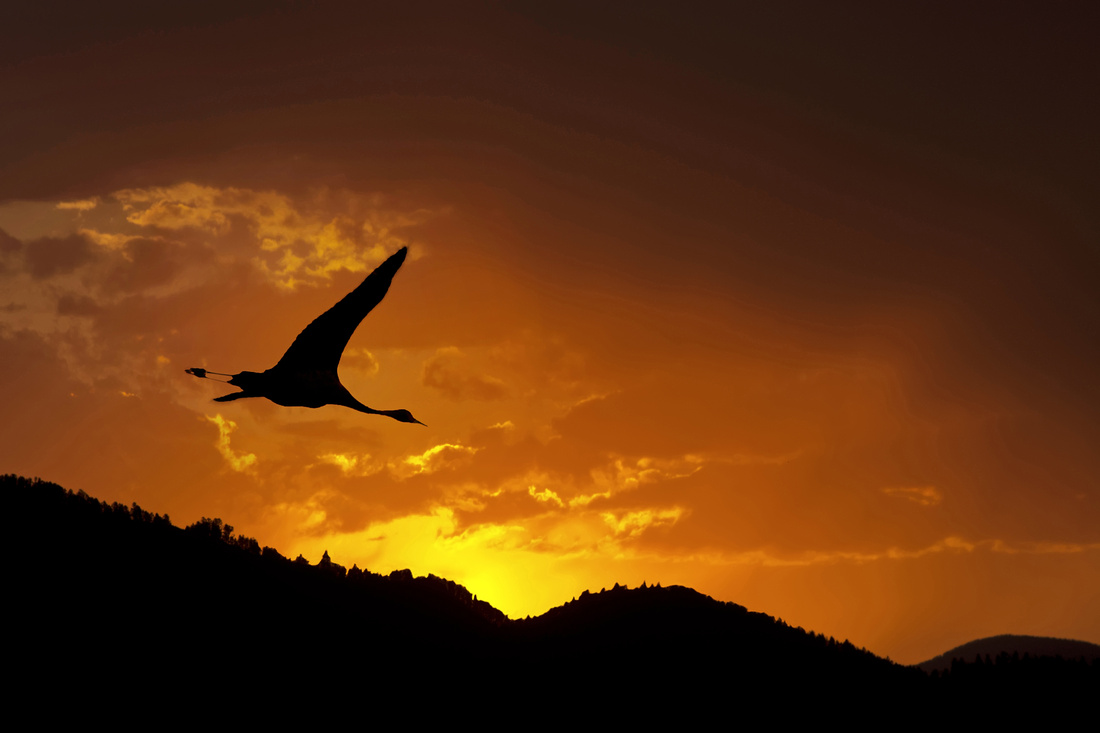 It was 8:30 p.m. on a late July evening in the Absaroka-Beartooth Wilderness when an hour-long barrage of one-inch hailstones finally stopped pounding my tent above Native Lake.

The lightning, which had been so close I couldn’t finish saying “one, one thousand” before thunder boomed, had finally moved about five miles away.

Hearing only a slight drizzle, I grabbed my camera and crawled out of the tent. The light was low, but pink sunset clouds were still reflecting in nearby tarns that were surrounded by the newly fallen hail.

In the other direction, dense clouds and the lake itself were glowing with the most vibrant purple I’d ever seen.

This scene was just one of the highlights of nine days I spent as an Artist in Residence for the Absaroka-Beartooth Wilderness Foundation (ABWF) this past summer.

In partnership with the U.S. Forest Service, ABWF sponsors several Artists in Residence each summer to spend seven to ten days in the wilderness, drawing inspiration from the beauty and solitude for their painting, writing, musical compositions, or other work.

For me, the artist residency in an ecosystem very different than where I live in rural Oregon gave me unusual opportunities to apply my “Closer to Nature” approach to photography, focusing in on simple details and uncluttered images in an attempt to see nature’s beauty with fresh eyes.

I photographed a sandhill crane silhouetted against a dramatic yellow sunset.

An intensely yellow-orange lily flower was reflected in a lake.

A rainbow appeared above trees colored with red sunset light.

Textures caught my eye on big boulders that I later learned were fossilized coral.

I had a relatively rare encounter with a pika and photographed a lone whitebark pine – both species in jeopardy as climate change threatens the cold environments they require.

As a follow-up to this artist residency, I’m now sharing these and many other images with ABWF to use in its educational work promoting and maintaining wilderness, as well as posting them for the public at MattWittPhotography.com.

With the high-altitude weather sometimes turning harsh, and no one else around for much of the time, I had plenty of time to think about the people who survived in this wilderness for thousands of years without having a car at a trailhead or housing to go back to with electricity and heat. Given how much time most of us spend sheltered by those comforts, it seems more important than ever to protect wilderness and all the living things that depend on it.

This summer, two other artists took part in ABWF’s program. One was Stephanie Rose (StephanieRoseArtist.com), a painter who used a Forest Service cabin as a her base of operations.

“I painted a collection of field studies, each of which seared into my memory my impressions of a particular place,” Rose said. “I will use these field studies to grow paintings in the studio, where I am able to further distill the motif I want to communicate to other people.”

The other was Marc Beaudin (CrowVoice.com), a poet and theater artist who worked from a remote Forest Service cabin up the Boulder River south of Big Timber.

“I finished a manuscript of poetry called Life List, where each poem honors a different bird species that has made an impact on my life and writing,” Beaudin said. “Having several days and nights without electricity, and all the disruptive technologies that come with it, meant there was nothing to take me away from my work, and having the power and beauty of the mountains, forest and river around me meant constant inspiration to keep at it.”

This was the sixth year the Absaroka-Beartooth Wilderness Foundation has operated its Artist in Residence Program, according to David Kallenbach, ABWF’s executive director.

“I’ve been astounded by how many people have found out about the opportunity and by the diverse qualities of the artists who have participated in the program – from a videographer to a paper-making artist to a composer, as well as painters, writers, and poets,” Kallenbach said.

To learn more about the Absaroka-Beartooth Wilderness Foundation and how to get involved in its many volunteer opportunities, see ABWilderness.org.